In 1935, a scientist named Clive McCay published a startling discovery: rats with severely restricted diets lived up to 33% longer than previously known possible. Over the last few decades, similar experiments have been carried out on countless species, from worms to rodents and even primates.

The specifics vary from study to study, but many show results just as surprising as those that McCay discovered so many years ago. The exact manner by which calories are reduced changes across studies, but the animals’ calorie intakes are generally reduced by as much as half their normal levels. Depending on the species, the most promising results have shown lifespan extensions between 50 and 300%.

If these results hold water, then they could have important implications for our own longevity. However, these studies are not without controversy. Many scientists are concerned that calorie restriction will not benefit humans, or that it could even result in long-lasting harm. Is calorie restriction a silver bullet against aging, or something that should be kept in the laboratory?

At first glance, calorie restriction is a counter-intuitive way to approach longevity. Here, we use this term to refer to up to a 50% reduction of calories from a normal diet, not simply a lack of overeating. Consuming so much less food than a normal diet seems like it should reduce your lifespan, not extend it. To better understand where this idea comes from, it’s necessary to first understand how aging – the process by which our bodies function less well over time – works. There are two classic theories that could potentially shed some insight into this process: the rate of living theory, and the free radical theory.

The rate of living theory arose from the observation that larger animal species tend to have longer lifespans than small ones. One way to explain this observation is through the concept of metabolic rate, which refers to how quickly an animal expends energy for the body’s day-to-day functioning. This includes energy needed for processes like breathing, maintaining body temperature, and circulating blood. Since larger animals have also been observed to have lower metabolic rates, this theory suggests that slower metabolic rates – i.e., slower “rates of living” – are associated with longer lifespans (Figure 1). 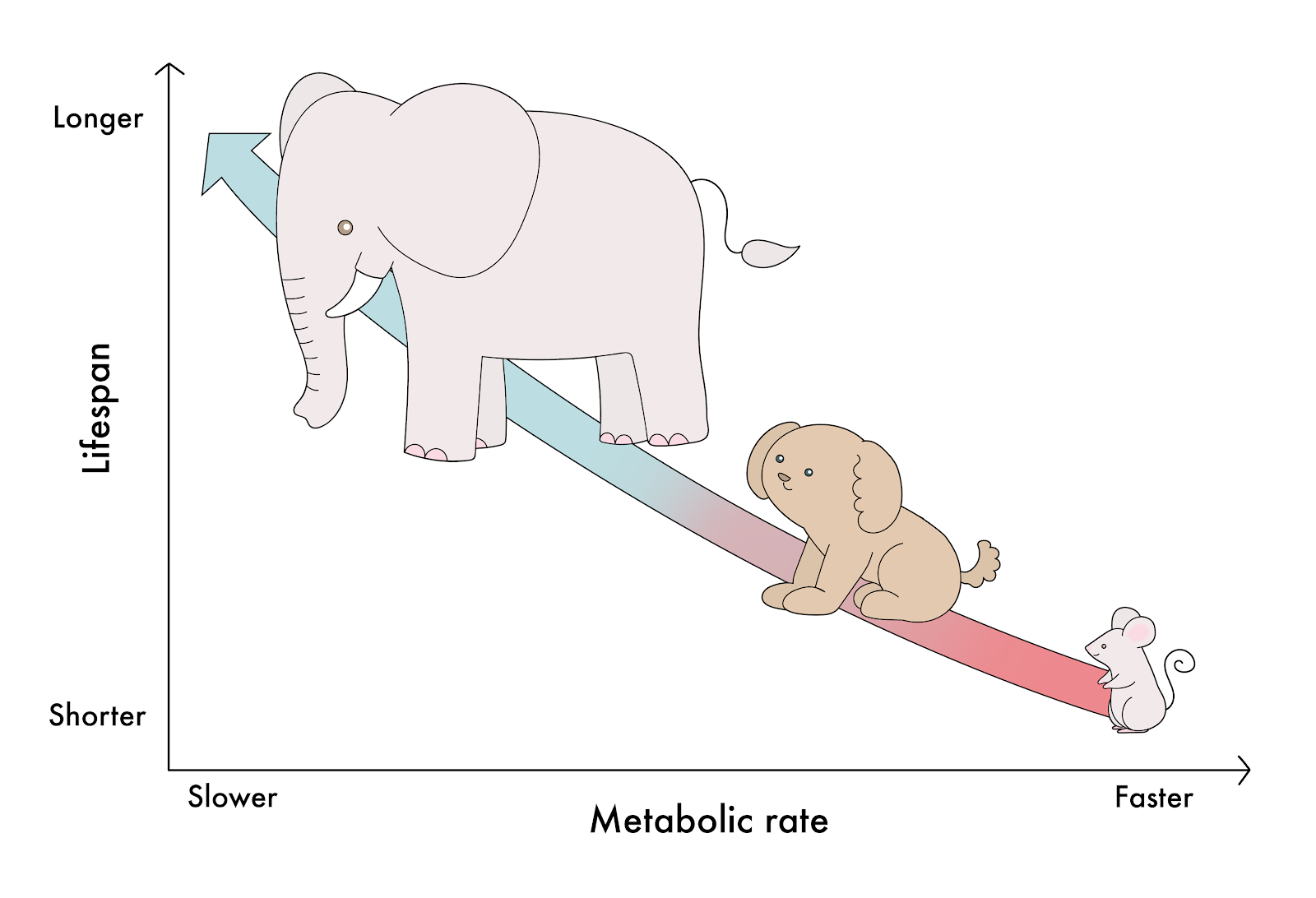 Figure 1: The so-called rate of living theory posits that larger animals live longer than smaller animals due to their slower metabolic rates.

The free radical theory provides a potential explanation for the rate of living theory. Under this theory, aging is a result of the cells in the body accumulating damage over time. This damage comes from so-called free radicals, which are highly reactive atoms or molecules naturally produced by our bodies. They can damage proteins, DNA, and fatty tissue, which in turn is theorized to eventually cause age-related diseases, such as heart conditions, neurodegenerative disorders, or cancers (Figure 2). Because free radicals are created by our metabolic processes, slower metabolisms could decrease the rate of free radical production and subsequently extend lifespans. 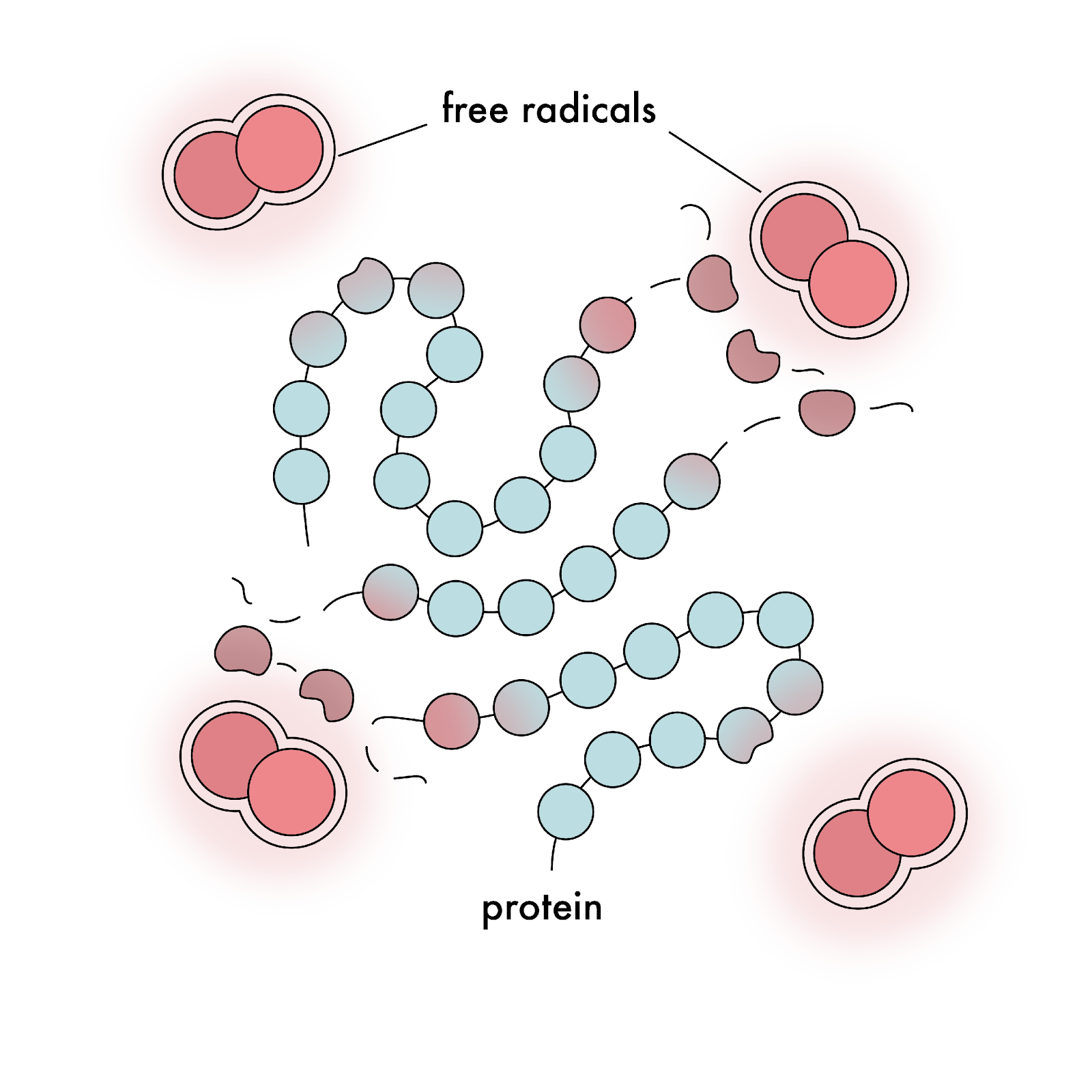 Figure 2: According to the free radical theory, highly reactive atoms or molecules, called free radicals, can damage DNA, fatty tissues, and proteins in the body. Accumulation of this damage may be what leads to aging.

It’s important to note that no complete theory of aging, including these two, is fully accepted within the scientific community. The exact mechanisms of aging remain an open question, but regardless of whether either of these theories are completely accurate, metabolic rates and free radicals seem likely to play some role in the aging process.

Calorie restriction enters this equation because it is known that drastically reducing food intake will reduce metabolic rate. If less food is being consumed, then there is less food that the body has to process. Moreover, since calorie restriction generally results in weight loss, less energy overall is needed to maintain the reduced body mass.

Does calorie restriction have a place outside of the laboratory?

While many scientists are optimistic about the potential for calorie restriction to improve human longevity and quality of life, many others are skeptical of these studies and concerned that calorie restriction in humans could do more harm than good.

Moreover, some studies examining rodents have found that benefits from calorie restriction are proportional to how excessively those animals would normally eat. In other words, a rodent that might ordinarily gain a lot of weight when eating freely would experience a larger improvement in health than a rodent that might naturally eat a more moderate diet (Figure 3). Hence, it is possible that the benefits from calorie restriction may only be due to how unhealthily those animals might otherwise live. In animals that already eat healthy portions, it could be the case that calorie restriction may not yield any particular advantage. 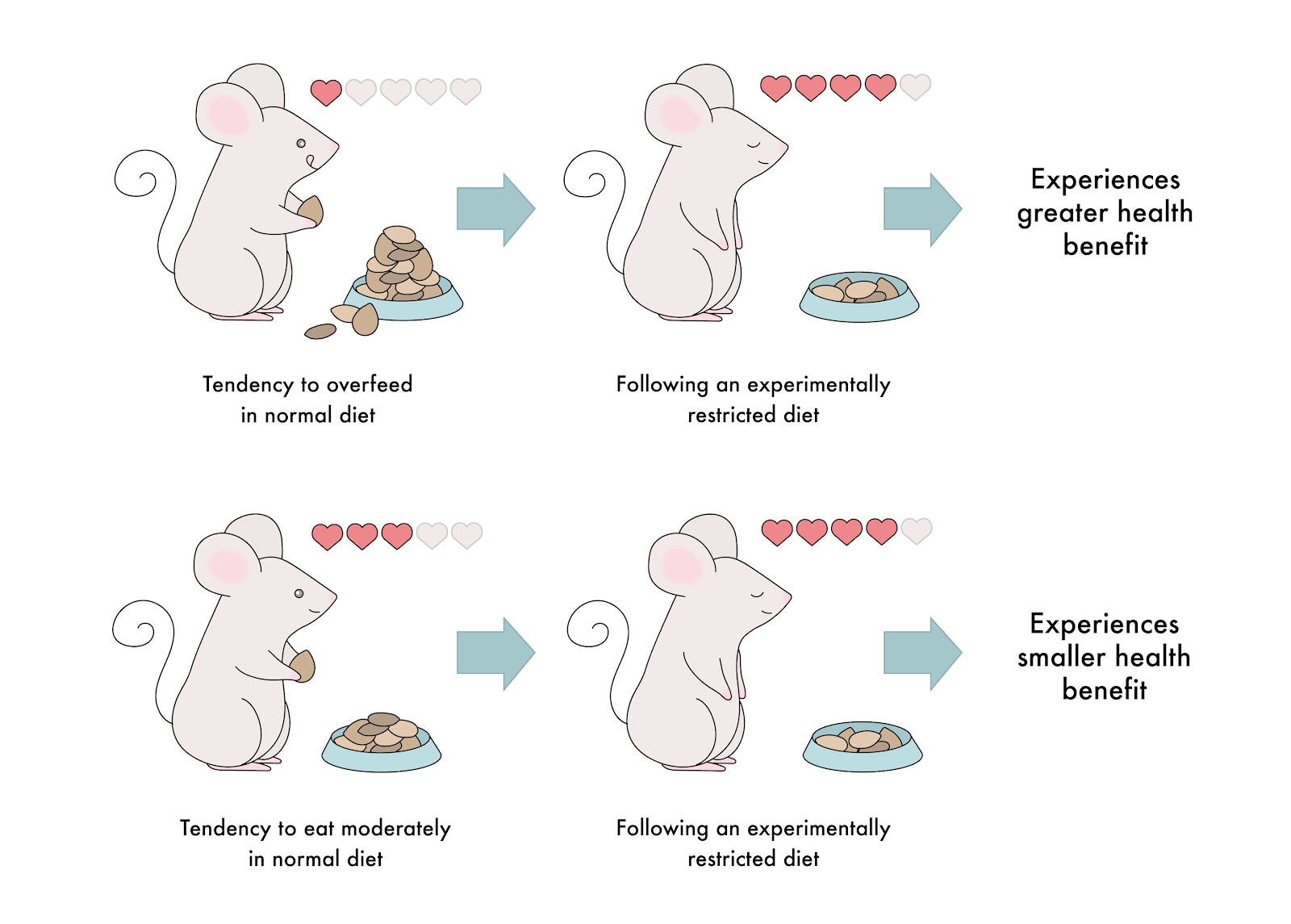 Even putting the concerns with these studies aside, many scientists are skeptical of applying results from other species to humans. It is much more challenging to carry out calorie restriction studies in humans, since we simply cannot (and should not) exert the same degree of control over human subjects as we might for rats. As a result, there have been very few studies in humans.

The most prominent such human study was the CALERIE trial, a randomized clinical trial in which healthy people were divided into a calorie reduction group and a control group. Because the trial only lasted for two years, the effects on lifespan could not be directly measured, and the goal was to instead investigate the effects on typical markers of age-related disease risk. The calorie restriction group was told to reduce intake by 25%, but in practice, they only reduced their intake by about 12% on average. Nevertheless, there were still significant health benefits observed in this group. This included lower cholesterol and blood pressure levels, as well as improved insulin sensitivity index.

However, this trial alone is not enough evidence to conclude that calorie restriction should enter standard medical practice. Even though the participants were all healthy, many of them had BMIs that fall in the overweight category at the start of the trial. This means that any health benefits observed cannot be fully decoupled from the weight loss most participants experienced on their restricted diets. It is already well-known that going from being overweight to a healthy weight has a positive impact on the body; however, the trial results do not clearly answer the question of whether metabolic changes due to calorie reduction beyond a normal diet can improve health. Moreover, the trial was too short to determine the long-term effects, good or bad.

Much more research is needed, but human studies face many limitations. Calorie restriction is a challenging protocol to follow and likely to be met with low compliance. Moreover, asking individuals at a healthy weight to dramatically reduce calories – as animal studies have been doing – poses ethical concerns. Clinical research on eating disorders has amply shown the negative consequences of excessive restriction and malnutrition, so trials would have to operate very carefully to avoid risking the safety of their participants.

Ultimately, all these studies on calorie restriction, both animal and human, may prove useful in a different way. We may never reach a point where we can adequately determine both the effectiveness and safety of recommending calorie restriction in the clinic. However, understanding why caloric restriction seems to promote longevity could shed deeper insight into the aging process itself. Addressing this mystery may help lead to other anti-aging efforts, even if this particular calorie restriction work never makes it out of the lab.

Isabella Grabski is a 3rd-year PhD student in Biostatistics at Harvard University.

Jovana Andrejevic is a fourth-year Applied Physics Ph.D. student in the School of Engineering and Applied Sciences at Harvard University.

20 thoughts on “Can Calorie Restriction Extend Your Lifespan?”