When we think of camouflaging, we often think of chameleons changing colors, or the stripes of a tiger blending in with the grass. However, what many people don’t know is that plants, too, have evolved to camouflage. In order to hide from herbivores, some plants have adapted their colors, shapes, and patterns to match their surroundings, making them difficult to spot and be eaten. Recently, researchers have found that humans also play an important role in the evolution of camouflage in plants, particularly through commercial harvesting.

In a recent study from the Chinese Academy of Sciences, scientists looked into different populations of a type of plant named Fritillaria devlavayi. This plant has been used in traditional Chinese medicine for over 2,000 years, and is still highly sought after — it costs $480 per kilogram, or $218 per pound! Fritillaria grows in a rocky, mountainous area in southwestern China, but its color can vary drastically between locations. Sometimes, the plant is green and very easy to spot among the rocks, but other times, the plant is brown or grey and blends into the rocky background (Fig. 1). 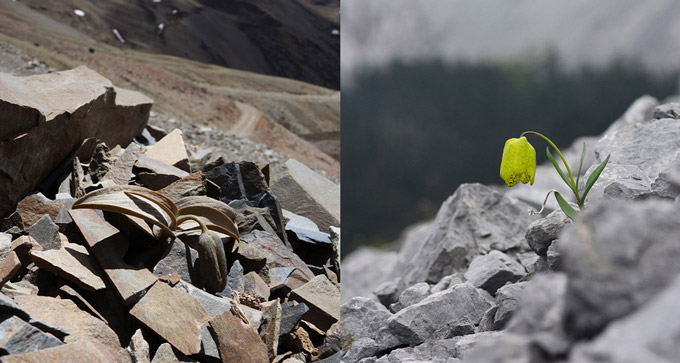 Figure 1. Fritillaria plant in different locations. They are more likely to be camouflaged (left) if they are grown in areas with higher frequency of harvesting and increased ease of collection. Figures obtained from Y. Niu.

Why is there such a big variation in color? The scientists sought to find out the answer by analyzing the regions where the plants grew. They found that Fritillaria were more likely to be camouflaged when they were located in areas with higher frequency of harvesting and increased ease of collection (i.e. the rocks in the area were a lot smaller and less time was needed to dig out the plant from the rocks). Since these plants have no natural predators, it seems they have evolved to mimic their environment in order to evade humans. Therefore, this study suggests that human harvesting was the main force that influenced Fritillaria’s evolution of camouflage.

Humans have always been known to be a strong selection pressure on certain traits in animals, causing unintended evolutionary changes. For example, trophy hunters that hunt for large horns on bighorn sheep have actually put evolutionary pressure on the sheep and caused them to now have smaller horns. This study was the first clear evidence showing that humans have the ability to affect the evolution of plants in a similar drastic manner.

Check out the online science experiment “Spot the Fritillaria” to see if you can spot these camouflaged plants!

Dr. Yang Niu is a research scientist at the Kunming Institute of Botany, Chinese Academy of Sciences, studying Evolutionary Biology, Ecology and Botany.

Original Article: Commercial Harvesting Has Driven the Evolution of Camouflage in an Alpine Plant. Current Biology.

One thought on “Plants Can Camouflage Too, and They’re Hiding from Us”