From a young age, we learn that birds fly south for the winter. Sticking with these evolutionarily based migration routes, birds are able to avoid harsh temperatures and follow food sources. However, recent research has discovered potential shifts in previously well-established migratory routes, particularly for the songbird species Richard’s pipits (Anthus richardi). Pipits normally breed in Siberia and fly south to Southern Asia to evade Siberia’s harsh snow-covered winters. However, researchers at Université Grenoble Alpes in France noticed an increasing number of pipits spending their winters in Southern France, meaning the birds took an east-to-west route as opposed to their usual west-to-east route (Figure 1).This is the first documented report of a long distance bird migration occurring on an east-to-west axis. 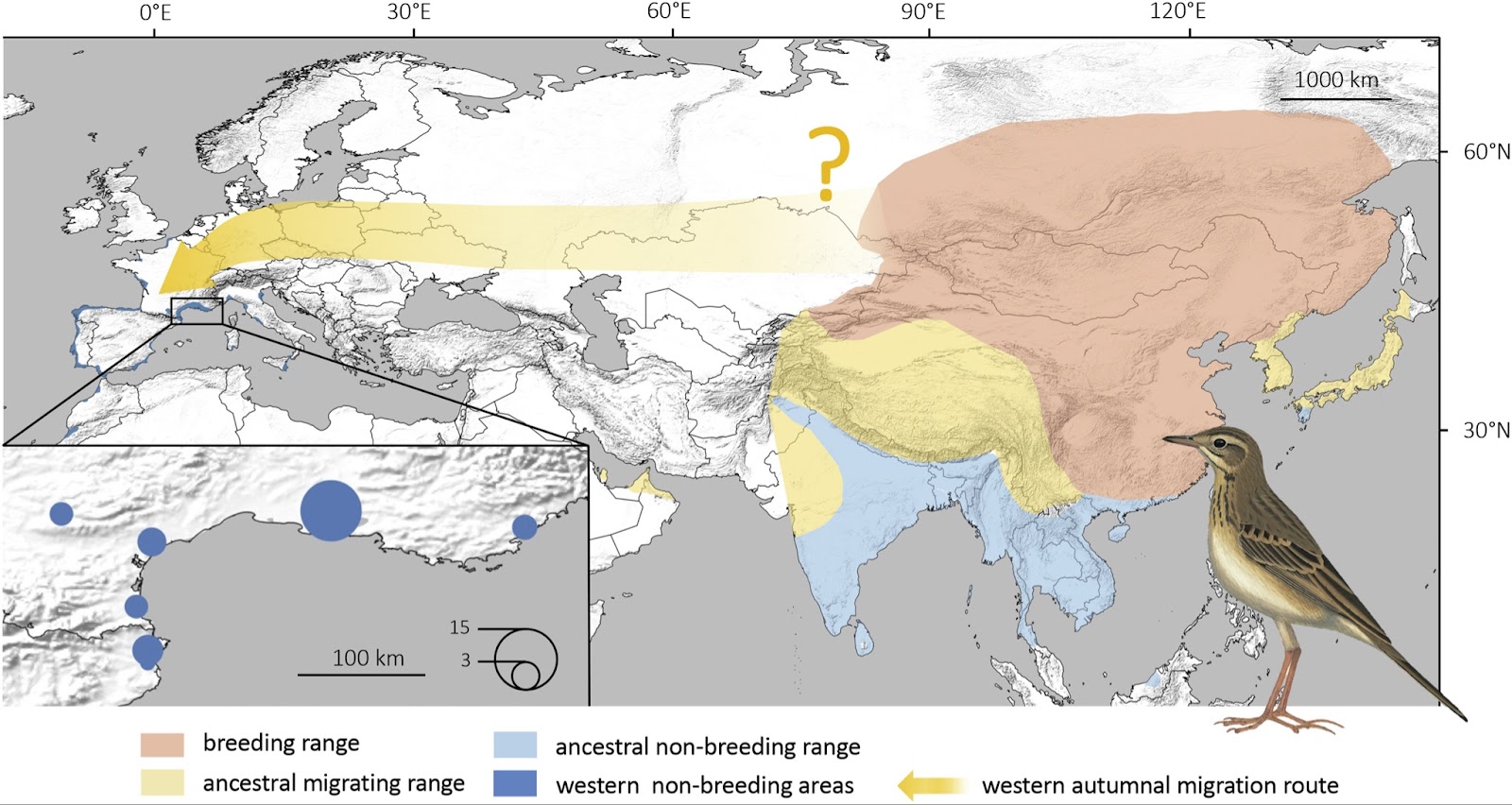 Researchers Paul Dufour and his colleagues at Université Grenoble Alpes in France began to actively monitor the population, capturing and tagging seven pipits in the winter of 2019-2020. The tags placed on the birds provided approximate geographic locations based on light levels and the length of day. The research team was able to successfully recapture three of the birds the next season, showing that the birds had flown all the way back to southwestern Siberia for the summer before returning to France. Alongside their observations and tracking, the research team also compiled data from a citizen-science database of 331 pipits photographed in Europe and Northern Africa, further confirming changes in migration route.

Migration routes in pipits are established based on inherited genetic code. After successfully completing their first migration, these songbirds establish a mental map of the route and continue to follow this route for the duration of their life. Since many birds found in Europe and Northern Africa were adults, there is evidence these birds had been following this route for a number of seasons, which means the change is likely due to environmental factors as opposed to genetic mutations. In particular, it is likely this route change is due to climate change. Using climate models, Dufour and his team estimated climate suitability for the pipits based on temperature and precipitation, finding that warmer locations in France have made the habitat more suitable for wintering. The research team has also suggested changes in route could be due to continued urbanization of the ancestral migration routes in Southeast Asia.

These findings demonstrate the flexibility of songbird adaptation and that changes in ancestral routes can be driven by changes in environmental factors. Ongoing climate change will likely induce further changes in songbird migration routes, but birds appear to be adaptable in confronting these changing temperature conditions.

Paul Dufour is a postdoctoral researcher at the University of Gothenburg in the Gothenburg Global Biodiversity Centre (GGBC) in Gothenburg, Sweden where he researches biodiversity patterns at different taxonomic, geographic and temporal scales, using birds as biological models.. He holds a PhD in Ecology and Evolution from Laboratoire d’Ecologie Alpine located in Grenoble, France.